Ari Emanuel is wrong about the following Hollywood matter 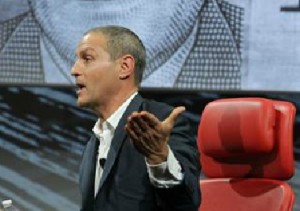 
But a fallacious argument that Hollywood believes at its peril.

It starts with a sound one: in the 90s there wasn’t much distribution
for content. Few channels and they had lots of power.

The years of tech have changed this – more tech in cable = way more
channels and more viewing methods like DVR & of course the massive
beast that is Internet.

So a precious commodity has devalued. Fine.

What Ari Gold then argues is a dangerous, dangerous falsehood.

“Because” distribution is cheap, the content asset is now much more
valuable. Sorkin and Scorsese have all the cards now.

An analogy: stuff on Amazon. Amazon offers free shipping. Distribution
is cheap. Does it lead to higher prices on the stuff? Not at all. It
depends on the competition in the stuff production market.

As economists like William Baumol of NYU and Tyler Cowen have argued,
in “the arts”, distribution and production costs being high are what
make the cartel behavior like Hollywood possible.

It has zero to do with “geniuses” like Sorkin.

The best poet in America is just as much better than the best director
vs their peers.

But look at the poetry industry. It is dead.

People do like music right? Look where that business is. Any idiot can
make hits and they do. So The Beatles and U2 era is permanently over.
There is nobody with the sales or earnings of those guys relative to
market/peers and there never will be.

Same for TV and movies. Soon. Ari is wrong.